The Knicks Land their Shooting Star by Marc “Razz” Rasbury

Posted on February 24, 2011 by RazzandJazzSports 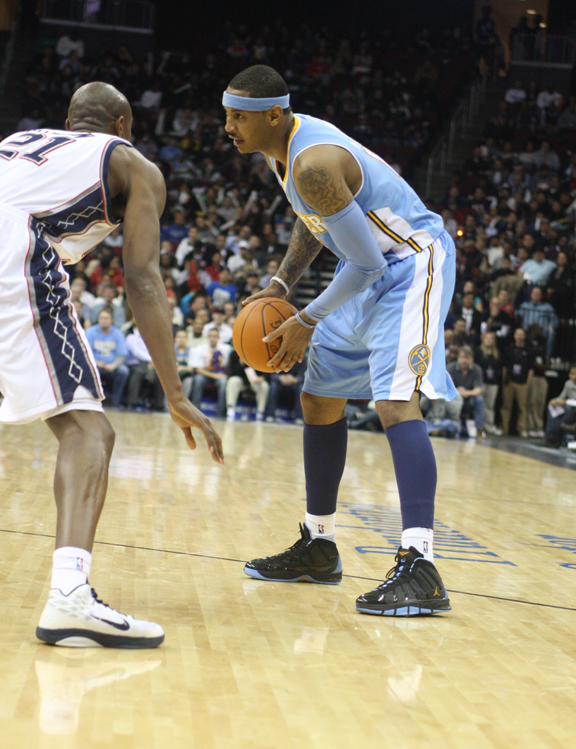 After spurning the Nets, Carmelo Anthony finally brought his talents to Broadway

It took forever.  It was one of the best games of chicken ever played.  But in the end, the
New York Knicks landed the coveted Carmelo Anthony.  This move automatically places
them in the conversation as power player in the NBA’s Eastern Conference.  I just caution
Knicks fans not to make any plans for the NBA Finals just yet and beware that more
unexpected changes may be on the way.

After months of going back and forth making offers and counter offers, the Knicks and
the Denver Nuggets finally struck a deal that will send Carmelo Anthony to New York.  This 12-player, 3-team block buster trade drastically changes the landscape of
both franchises.  The Nuggets are clearly now in rebuilding mold while the Knicks have
added a key component to their championship aspirations.  In getting Anthony, the Knicks
now have two of the premier players in the League when you pair him with Amar’e
Stoudemire, who is already having a MVP-caliber season.

Anthony is a lethal scoring machine who can pick apart defenses in so many ways.  He
can drill a contested 25 footer.  He can put the ball on the floor and take it all the way to
the hole or pull up for the mid-range jumper.  And, he can post up just about anyone in the
League at will.  There are those who think that Melo and Amar’e can not play together.  That is nonsense. These are two ballers who understand the game.  I’m sure that Knicks’
head coach Mike D’Antoni is not losing any sleep thinking about trying to get these two
to work in harmony.

Think about it.  The Knicks have not had a dynamic duo like this since Walt Frazier and
Willis Reed were winning championships in the early seventies and Dancing Harry was
doing his thing along the baselines.

In addition to getting Anthony, the Knicks also received Chauncey Billups.  I know that
Billups’ best days are behind him but you can not measure what this guy brings to the
table even at this advance stage of his career.  Not only is he a proven winner, he is one
of these best leaders in the NBA on and off the court.  The general consensus is that the
Knicks will buy out the remaining year of his contract after next season but every player
on the Knicks roster will benefit from playing with this battle-tested warrior who still
plays in-your-face defense and can hit the big shot when needed.  He is not a bad third
option when the shot clock is winding down.

The Knicks also get Shelden Williams, Anthony Carter, and former Knick Renaldo Balkman from Denver and Corey Brewer from Minnesota.  At least Williams and Brewer are willing to play defense.  Hopefully, their defensive attitude will become contagious within the clubhouse.

The Razz and Jazz Sports Blog was created by Marc "Razz" Rasbury and Derrel "Jazz" Johnson to create fresh opinions on New York Sports and beyond from two credentialed members of the media.
View all posts by RazzandJazzSports →
This entry was posted in Uncategorized. Bookmark the permalink.