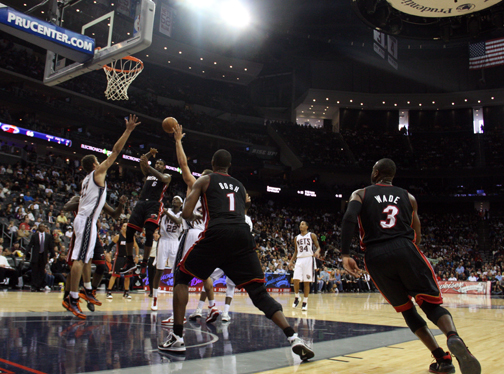 LeBron James, Dwyane Wade and Chris Bosh Will Combine to Win It All

The Miami Heat have experienced a tumultuous season of ups and downs in the first season of the Big Three on South Beach.  Ever since “The Decision,” in which LeBron James chose to take his talents to South Beach with Chris Bosh to join Dwyane Wade, there has been a lot of pressure on the team to win it all.  Some of it was self-inflicted, as LeBron talked about the three winning numerous championships together, but a lot has seemed vitriol, not only from NBA fans, but from media as well.

There were some, like myself, who predicted the Miami Heat to win it all at the beginning of the season.  Some, like ESPN/ABC NBA broadcaster Jeff Van Gundy, even predicted a challenge to the 72 wins by the Chicago Bulls of 1995-1996, an NBA record.

But the Heat started the season 9-8, and many of their detractors were critical of the team.  Then they went on to win 12 in a row, and 21 of 22, and the supporters were joyous.  Then came the infamous CryGate, in which Heat head coach Eric Spoelstra said one of the players was crying in the locker room.  Instead of weakening the team, it has seemed to be a rallying cry. Since CryGate, including the playoffs, the Miami Heat have gone 27-6, and another four wins will make them the 2010-2011 NBA Champions.

The Dallas Mavericks got to the NBA Finals in a completely different manner.  The Mavericks started the season well, winning 12 in a row and 17 of 18 in the first two months of the season.  Then starting small forward Caron Butler went down, and the team struggled.  They went on a season-long six-game losing, before recovering for another long streak of 10 wins in a row, and 18 of 19 toward the end of the season.

Still, the Collapse of 2006 follows the Dallas Mavericks, in which they lost four in a row to the Miami Heat after leading the NBA Finals series 2-0 and having a double-digit second-half lead in game three.  There are only two players on each team who played in the 2006 NBA Finals, Dirk Nowitzki and Jason Terry for the Mavericks, and Dwyane Wade and Udonis Haslem for the Miami Heat, but the label of soft has stayed with the team.

A win in six in the opening round of the NBA playoffs against the Portland Trailblazers was exceeded by a shocking sweep of the Los Angeles Lakers, which landed the Mavericks in the Western Conference Finals against the Oklahoma City Thunder, who they defeated in five games.  The Heat, meanwhile, defeated all three playoff opponents, the Philadelphia 76ers, Boston Celtics, and Chicago Bulls, in five game, with The Big Three of LeBron James, Dwyane Wade and Chris Bosh stepping up in close games to lead their team to victory.

So why do I think the Miami Heat will win the series, which pits two of the seven NBA MVPs who have yet to win a championship? (Charles Barkley, Allen Iverson, Karl Malone, Steve Nash, and Derrick Rose are the other five.)  Udonis Haslem earned the title of “Dirk-stopper” from Heat fans in the 2006 Finals. In six games, Dirk Nowitzki shot only 31 percent from the field on 13-of-42 shooting with Haslem defending him.  I am not expecting Haslem to defend Nowitzki this well, but he will have more success containing him than any other team in the NBA playoffs.  Expect Chris Bosh, and, in the fourth quarter, LeBron James to defend Nowitzki as well.

On the other side of the ball, the Dallas Mavericks don’t have any great matchups against the Big Three of Miami.  Tyson Chandler may defend Chris Bosh, but if so, that takes him away from the basket, weakening the Dallas defense.  If Bosh is defended by Nowitzki, he will score easily,  Shawn Marion, at 33, will not be able to slow down LeBron James, and perhaps the best defender on the team, Corey Brewer, weakens the offense.  Jason Terry, Jason Kidd, and DeShawn Stevenson will have to guard Wade, and the best option, Stevenson, is also a sub par offensive player.

In the end, I see the Miami Heat defeating the Dallas Mavericks in six games.  Their great defense, combined with their talented offensive players will be too difficult for the Mavericks to contain.  If the Mavericks are somehow able to win the series, it is because the Miami Heat were unable to stop Nowitzki and the Mavericks three-point shooters buried their shots.  I don’t see that happening, but I do see a parade on South Beach and tears of joy.