He Shocked the World by Marc “Razz” Rasbury

Posted on January 24, 2012 by RazzandJazzSports 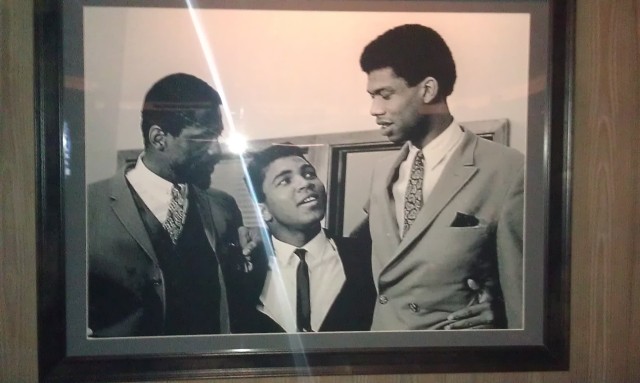 The term Living Legend is one of the most overused phrases in the English language. However, in the case of Muhammad Ali, it is an understatement. The man who many, including himself, consider to be the “Greatest of All Time” celebrated his 70th birthday this week. Although he ruffled some feathers during his lifetime, he is still one
of the most beloved individuals to walk this earth.

You will be hard pressed to come up with a more polarizing individual than Ali. He was one of the few athletes that truly transformed sports. Yes, he was a three-time heavyweight champion, dominating the sport for nearly two decades, but his influence stretches well beyond the ring.

He was Tim Tebow 30 years before we ever heard of the World Wide Web. As a matter of fact, the Tebow sensation pales in comparison to the firestorm that Ali generated four decades ago. This brash young man burst on the scene by capturing the 1960 light heavyweight gold medal in Rome. Then, two years later, he upset Sonny Liston to capture the heavyweight title. Most sports fans took Ali’s brashness with a grain of salt. Even his joining the Nation of Islam did not bother the masses that much. But when he refused to comply with his draft order to serve in the Vietnam War, all hell broke loose.

The man became a pariah with that move, a move that cost him the prime of his career. From 1967 to 1970, Ali sat on the sidelines serving a ban from boxing for not serving his country. He sat out on principle. He was opposed to the war and felt that he could not in good conscious participate in a war that he felt was unjust, while fighting for a country that did not respect his civil rights. His title was vacated and his ability to fight was revoked throughout the land. Joe Frazier eventually won the crown in a single elimination tournament.

Think about the money that Ali left on the table. Today, you can not get most athletes to endorse a political candidate, nevertheless take a stand on a controversial topic. As he inched closer and closer to bankruptcy, Ali refused to deviate from his stance. Society started to take notice and began to see his point of view. He received support from a vast cross section of America. From Martin Luther King, Jr.; to the average Joe on the street; to students at Cal Berkley, Ann Arbor and Chapel Hill; many of the population started to throw their support behind the People’s Champ even If they were in favor of the war.

The Supreme Court eventually overturned Ali’s ban from boxing, which set up the first Ali-Frazier fight, the most prolific sporting event of all time. It was not an epic event because you had two undefeated champs fighting for all the marbles, it became a political battle between those who were for the war and those who were against it. The contingent that still held a grudge against Ali for dodging the draft adopted Frazier as their symbolic figure. As you know Frazier won that fight, but Ali would eventually go on to recapture the title, taking out the likes of George Foreman, Ken Norton, Ernie Shavers and Frazier twice along the way.

For all he did in the ring, he is remembered just as much for what he did outside the ring. He gave away his best years for a principle that he truly believed in. Some still hold his stance on the draft against him, and some might not have liked the way he treated Frazier
during their epic battles, but one thing is hard to dispute: he believed in a principle and stood by it. Here is a man that was vilified in the 1960s and brought tears to our eyes when he lit the torch to start the 1996 Olympic Summer Games in Atlanta. The man has
gone from Public Enemy number one to one of the more beloved figures to ever walk the earth. So as you celebrate your 70th birthday, here’s to you Champ!

The Razz and Jazz Sports Blog was created by Marc "Razz" Rasbury and Derrel "Jazz" Johnson to create fresh opinions on New York Sports and beyond from two credentialed members of the media.
View all posts by RazzandJazzSports →
This entry was posted in Uncategorized. Bookmark the permalink.

1 Response to He Shocked the World by Marc “Razz” Rasbury