Posted on March 27, 2013 by RazzandJazzSports 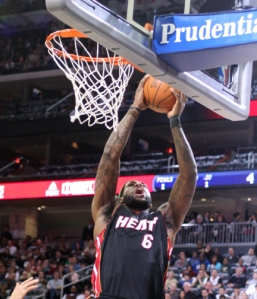 Will LeBron James Lead the Heat against the Knicks with a 30-game streak?

The Miami Heat have won 27 games in a row, and if they win their next three games, Wednesday against the Bulls in Chicago, Friday on the road versus the New Orleans Hornets, and a tough one Sunday in Texas with the San Antonio Spurs, they would then host the New York Knicks, who would take their talents to South Beach with hopes of ending a 30-game winning streak.

There is already plenty of fanfare when LeBron James, Dwyane Wade, Chris Bosh and the Miami Heat, who haven’t lost since Friday, February 1, 2013, against the Indiana Pacers, face the Knicks, be it at the World’s Most Famous Arena or in Miami, but if they are only three shy of the NBA record held by the 1971-1972 Los Angeles Lakers of 33, then the excitement would be off the charts.

New York Knicks head coach Mike Woodson talked about the potential opportunity. “They’re playing at such a high level, nobody is coming close to beating them.’’ Woodson continued, saying “ It would be nice. Their streak could end. They’re playing two good teams,”, but added if “they’re undefeated and we go into Miami, hopefully we can be the team to break their streak.’’

There is certainly a part of me that wants to see the Knicks take on the Heat with a 30-game winning streak on the line for all of the excitement it would bring to that game. The Knicks, whether playing well or not, will fulfill their end of the bargain by playing the game. Let’s hope that the Miami Heat return home to face New York with their historic streak on the line to fulfill their side as well.