Posted on June 24, 2013 by RazzandJazzSports 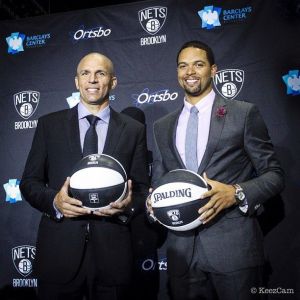 On Monday, June 3, 2013, point guard Jason Kidd retired after playing 19 years in the National Basketball Association, his last season with the New York Knicks. Nine days later, Kidd made the improbable journey from player to head coach of the franchise that he experienced his most success on the court, the Nets, when he signed a three-year deal to head the team.

Kidd spent six and a half seasons with the then New Jersey Nets, and the franchise experienced their greatest success with him as leader of the team, advancing the NBA Finals in 2002 and 2003, before losing to Shaquille O’Neal, Kobe Bryant, and the Los Angeles Lakers and Tim Duncan, Tony Parker, and the San Antonio Spurs, respectively. A horrible team the year before Jason’s arrival with a 26-56 record, Kidd led the team to 52 wins in his first season, a remarkable turnaround.

It wasn’t long ago that Boston Celtics head coach Doc Rivers (who may be headed to the Los Angeles Clippers with Kevin Garnett in a rare trade that would include a head coach), waxed poetic about the basketball intelligence of Jason Kidd, the basketball player. He beats everyone with his brain.” Rivers elaborated. “If you think quicker than a guy can move, you’re still quicker. That’s why he’s there first, because he thought what the guy was going to do before he did it. He’s just a valuable guy to have on a basketball team.” High praise bestowed upon him by one of the top coaches in the NBA. But what do we know about Jason Kidd, the coach?

There is absolutely no way for anyone to quantify how good of a coach Jason Kidd can be. I have no doubt in my mind that Coach Kidd will be an excellent manager of games, as he has played professional basketball for 19 years at the highest level. Few things will escape him during a game. How quickly will Coach Kidd adjust to the daily rigors of an NBA head coach? How will he get the best out of his players, something he always did on the basketball court as a willing passer, when he doesn’t have the basketball in his hands? How will Nets players respond to discipline from a head coach who was a player on the rival New York Knicks the season before?

There is no doubt that Coach Kidd takes over a talented roster with a core that includes former all-stars Deron Williams, Joe Johnson, and 2012-2013 All-Star center Brook Lopez. There is also little doubt that owner Mikhail Prokhorov expected more from the roster, the reason why the franchise has a third head coach in less than a year in their first season in Brooklyn.

If Coach Kidd is able to harness the immense potential of Williams, while continuing to develop Brook Lopez, then the gamble on a rookie head coach by Nets general manager Billy King will be a success, which will be charted by how many times you hear the elongated “Brooklyn” chant at Barclays Center during the 2013-2014 NBA season and beyond.