Posted on November 14, 2013 by RazzandJazzSports 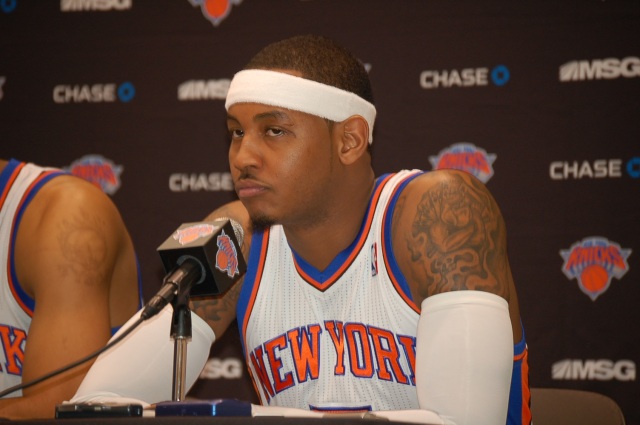 The New York Knicks and Brooklyn Nets both got off to fast starts last season, and the Knicks, helped by getting out of the gates strong, won the Atlantic Division, with the Nets finishing second, and both teams finishing with the second and fourth seeds, respectively, in the Eastern Conference at the end of the 2012-2013 season. Unfortunately for both teams and their fan bases, they have struggled to begin the 2013-2014 NBA campaign, resulting in both teams having sub-.500 2-4 records.

It appears clear to anyone and everyone who has watched the Knicks this season that they will not get off to the 18-5 start of a year ago. While 1-1 away from the newly transformed Madison Square Garden, the blue and orange are only 1-3 at the World’s Most Famous Arena, including two games in which they trailed by 20+ points in the first half, most recently a 31-point loss to the San Antonio Spurs Sunday afternoon.

Knicks head coach Mike Woodson stated what was obvious to anyone who viewed the game. “We didn’t compete tonight and that’s just unacceptable,” he said after the blowout loss. “You should feel good about playing at home in front of your fans…people spend their hard-earned money”, he continued, possibly alluding to the many boos the team heard throughout the game for what appeared to be a lack of effort.

With Tyson Chandler, the only legitimate center on the team, out for at least another three weeks, and limited minutes for both Amar’e Stoudemire and Keyon Martin due to injuries, the Knicks are forced to play newly acquired Andrea Bargnani more minutes at the five. This severely decreases the efficiency of the team’s defense and rebounding, while increasing its offense versatility. Unfortunately, the team isn’t in sync offensively.
The Knicks need to gel, and it needs to happen quickly, or the season could be lost before it is even a month old. Owner James Dolan guaranteed a win versus Atlanta while performing with his band, which indicates that he expecting more. Knicks fans want more as well.

In Brooklyn, the Nets made the biggest moves of the offseason with the acquisitions of Kevin Garnett, Paul Pierce, Jason Terry and Andrei Kirenlinko, but after six games, they also sit at the bottom of the Eastern Conference with a record of 2-4. The only bright spot on the short season was a home victory over the defending NBA champion Miami Heat, who themselves have struggled to open the season.

Why are the Nets struggling? Deron Williams, a former three-time All-Star and arguably the best player on the team, has battled health issues to start the season. He has struggled from the field, shooting 42% while averaging only 10.8 points per game through the first six. Joe Johnson touched on this after the loss to the Pacers Saturday. “Having (Williams) basically being out until the season opener…it’s been a little tough. I think us starting a little rocky was kind of expected, but we’ll get it together.” Hope Nets owner Mikhail Prokhorov feels the same way too. Williams did have his best performance of the season against Indiana, with 17 points and 10 assists, and if he continues to improve, the Nets will as well.

This team also is finding its identity. Though they have veterans with championship experience, the best players on the team, namely Williams and center Brook Lopez, do not, and they need to emerge as leaders on and off the court for this team to succeed.

Some might look at rookie head coach Jason Kidd as part of the issue, but it is still too early to know what type of leader Kidd will be on the sidelines. In the final seconds of the game against the Indiana Pacers, Kidd drew up a good play that got Johnson a pretty good look from three-point range, a shot that Johnson has made in clutch situations many times during his career. If that shot falls, and the Nets win, 3-3 with wins over Miami and Indiana puts a completely different spin on the start of the season.

Pacers head coach Frank Vogel likes what he saw out of Brooklyn. “They’re going to be there down the stretch. They’re just beginning to gel, it’s a long season.” I agree with Vogel. The Nets will improve as the season continues, and should be a dangerous team by the 2014 NBA Playoffs. The Knicks are a different story. Their lack of effort at home games is troubling, and needs to be corrected immediately. They are short on talent because of injuries, but there is no excuse for being short on desire. New York basketball fans were treated to three thrilling playoffs series with the Knicks and Nets last season, but if both teams continue to struggle, that will certainly not happen this May.